Every year, the iGEM team makes a Wiki page on which they report all their work and accomplishments. This is one of the requirements of the iGEM competition. By clicking on the logo’s you will be directed to the corresponding Wiki page!

2022
Currently, 3-5% of the world population is affected by autoimmune diseases. Antineutrophil cytoplasmic antibody (ANCA)-associated Vasculitis (AAV) is a group of rare, but life-threatening autoimmune diseases characterized by tissue inflammation causing necrosis (death) of blood vessels. To overcome shortcomings of the current therapies, we designed !MPACT: a Modular and Personalized Autoimmune Cell Therapy. A novel therapy for AAV, where immune cells of the patient will be harvested, genetically modified, and multiplied, after which the engineered cells will be injected back into the patient. This cell therapy will fight the inflammation upon activation of the cell by the disease marker ANCA.

2021
Inflammatory Bowel Disease (IBD), including Crohn’s Disease and Ulcerative Colitis, is a chronic inflammatory disorder of the intestine. Endoscopy is necessary to establish a diagnosis for IBD. This technique is an invasive and often unpleasant procedure for many patients. As a solution new genetically engineered  E. Coli bacteria are administered to the intestine, where they detect an IBD biomarker resulting in the formation of small gass vesicle. These gas vesicles can then be measured and snapped by conventional ultrasound equipment.  Subsequently this method provides a new and non-invasive diagnosis of IBD.

Bacterial infections are all treated with lots of antibiotics. An increasing problem nowadays and one of the biggest threats to global health in thirty years will be antimicrobial resistence. Bacteria mutate continuously, whereby they can make themselves resistant to the antibiotics used to treat the infection. This process is heavily accelerated by unspecific and frequent use of antibiotics.  This team aims to overcome the antimicrobial resistence problem by improving the diagnostics of infections to decrease and prevent antibiotics misuse. By developing a more specific and faster detection method, infections can be treated more quickly and specifically without the development of antibiotic resistance. 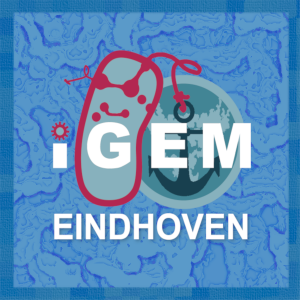 Living biomaterials are an innovative type of device with wide-ranging implications. Combining the flexibility of living cells with bio-compatible materials, this new class of devices is expected to impact many fields and assist society in dealing with the challenges ahead. Bacteria are a particularly attractive platform since they can be genetically “tailored” to produce many different types of proteins in response to almost any known type of chemical, physical or biological change.

Cancer is a major cause of death worldwide. With our project, GUPPI, we hope to set the basics of a system that can encapsulate the cancerous tissue to prevent metastasis in an early stage. GUPPI utilizes Protein Protein Interactions and is inspired by the formation of membraneless organelles by multivalent interactions. A designed protein scaffold and its binding partner, both having sequential repeating units, will respond to an inducer and form a gel-like structure. We envision that later on, GUPPI can respond to extracellular conditions that will act as an inducer of the gelation to specifically target and encapsulate the desired tissue.

Sensitive, accurate and quick detection tools are the key to problems within all fields of society. Already a lot of research is done to accomplish this, but these tools are not yet always available. Many sensor systems are designed for the detection of a specific molecule, but a universal approach is still lacking. The 2015 iGEM team of TU Eindhoven aims to develop a modular sensor system based on Clickable Outer Membrane Proteins (COMPs) in E. coli.

iGEM Team TU Eindhoven 2014 focuses on engineering the outer membrane of E. coli. We have created a new tool for the synthetic biologist’s toolbox; a tool that allows genetically engineered machines to have a specific coating.

Our project presents an alternative solution to the use of heavy metals MRI contrast agents (since the most commonly used heavy metal Gadolinium may be involved in the induction of diseases and may be toxic when the patient has kidney failures) by focusing on CEST MRI. Within CEST imaging, proteins enclosing hydrogen atoms can generate high quality images. Escherichia coli are used to express CEST proteins when the bacteria sense a hypoxic environment due to a promoter designed for this purpose, thus working as both a production and delivery system for the CEST MRI contrast agent.

Eindhoven, the city famous for its light bulbs, is the place where the roots of Dutch television lie. We, the iGEM team of the Eindhoven University of Technology, developed an innovative piece of electro-biological equipmentwhich will replace your old television screen in the future! We proudly present to you SOMY-LCD! It’s a multi-colored display, in which genetically engineered yeast cells are electrically stimulated to induce a fluorescent light response and consequently function as pixels. Since calcium takes the leading part in this process, the yeast cells are engineered with fluorescent calcium sensors and extra voltage-gated calcium channels.